Mary Corkhill from Norwich recently contacted me by email. The subject heading – HELP!

Mary’s rescue cat Tonto that she’d had for three months had been spraying all around the house. Mary has another cat, seventeen year old laid back Billy.

Every day Tonto backs up to the door, lifts this tail and releases a fine spray of urine over the door, chairs, the TV and even over Billy’s bed! Mary had a problem. But it was one I could solve.

Figures from the British Association of Pet Behaviour Counsellors state that marking behaviour in cats is the biggest behavioural problem in the UK cat population. 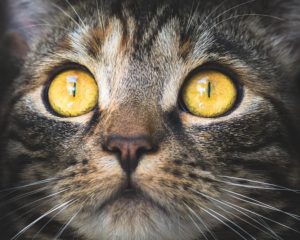 Spraying is marking behaviour, not a litter tray problem. Sprayed cat urine contains pheromones, a substance that animals use to communicate. Combinations of pheromones work like fingerprints: they identify the cat.

A spraying cat marks his or her territory with cat urine. It simply says: ‘This is mine’. As a human you may not like it but getting angry doesn’t help the situation. It may even have an opposite effect; more spraying.

Cats in heat are attracted by the odour of cat urine. For them, spraying is something like an invitation to love. The results may be there in 65 days: a bundle of cute little kittens.

Cats do not only spray during sexual encounters. Some also do it during conflicts with other felines, or when they are stressed.

For people the scent is far from pleasant. Thankfully most cats spray outside. But what if you have a cat spraying inside like Mary? Do something about it! And yes, that is possible.

The most effective thing you can do is neuter or spay your cat. Most castrated toms stopped spraying from the day they were operated upon. But maybe you have a reason not to neuter your cat. In that case try to find out why your cat sprays.

Maybe they spray only when it sees another cat. Solution: block the view. Or the spray because of a conflict with another pet. Keep them separated (for a while), and the problem might be over.

If you don’t know why your cat sprays, discuss it with your veterinarian. Chances are they will advise you to spay or neuter your cat. But your vet can also check if there is a medical problem – usually within the urinary tract.

As an animal healer I like to observe animals in their own surroundings, so Mary had booked me to give animal Reiki to her cat in the hope of calming and balancing Tonto. After the initial consultation to establish the cats’ behavioural traits I asked to look around where the cats slept. I saw Billy and Tonto snuggled together on Mary’s bed so I knew the cause of the spraying wasn’t because of aggression or to mark territory. No, it was a very simple one; beside the kitchen waste bin was the littler tray, the ONLY litter tray in the house. Mary told me how Billy and her old cat who’d passed away a year ago were quite happy to share a litter tray, but I had to explain that most cats aren’t. After all, I certainly wouldn’t be happy to use a toilet that had brown little lumps in from the previous user! I have one house cat and even he has two litter trays; though he is rather spoilt!

A simple solution to what could have been an on-going and rather stinky problem.

Do not leave this problem unsolved. Cat urine odour and stains can make your home a very uncomfortable place.

Don’t miss out on course offers and news from Animal Magic Training!